The vast majority of federal criminal cases never make to a trial, rather they are resolved through a plea agreement between the defendant's criminal defense lawyer and the federal prosecutor. Plea agreements typically involve a defendant pleading guilty in exchange for a getting some federal charges dropped, a reduced charge, or for a recommendation for a lighter sentence.

Federal prosecutors frequently prefer a plea agreement because it not only obtains a criminal conviction, but also saves significant time and expense of taking the case to trial. There are numerous situations where a defendant will decide to accept a plea agreement in a federal criminal case. 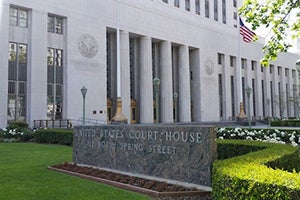 For example, a defendant is well aware of their guilt and solid evidence against them and is seeking a plea bargain to receive a lesser sentence. Another example includes a situation where they want to cooperate with federal agents who are investigating other related cases.

There are also situations where the defendant might have played a minor role in the crime, even possibly innocent, but will accept a plea agreement to resolve the case quickly without a trial.

In most federal criminal cases, a plea agreement will reduce a defendant's risk of a long federal prison sentence. Also, federal prosecutors have thoroughly investigated their case and normally have substantial evidence against them before it reaches a trial stage.

It should be noted that not all federal plea agreements have no risk to the defendant. There are situations where a prosecutor will offer little, but demand a lot from the defendant. For example, they will insist that any plea agreement must include a waiver of your right to appeal the sentence. They might also want a defendant to admit to other criminal conduct that might be used for an enhanced sentence.

However, the plea bargain will often determine the sentence by the federal judge and most defendants accept the plea agreement because their chances are high for a conviction and a more severe sentence.

There are many types of federal charges, such as drug offenses, that carry mandatory minimum sentences. Thus, you could be offered a sentence of 3 years in prison, but a conviction at trial could result in 7 years.

To give readers a better understanding of federal crime plea agreements, our federal criminal defense attorneys are providing a review below.

What You Need to Know About a Federal Plea Agreement

A plea agreement in a state-level case will typically involve a specific sentence which could include an exact amount of months in jail and terms of probation. In other words, both the prosecutor and defendant know what they are getting when the agreement is reached.

A criminal plea agreement made in a federal court is much different. First, there are no guaranteed sentences after a defendant enters a guilty plea in federal court.  When they enter their guilty plea, it's done without knowing what exact sentence a federal judge will impose.

In federal courts, a defendant's sentence is determined by the federal sentencing guidelines which are based on numerous factors.  In most cases, the criminal lawyer can give an estimated sentence, but there is no guarantee. Normally, a defendant will plead guilty and then return for a federal sentencing hearing months later.

After a guilty plea has been entered, the probation department will calculate the defendant's sentencing guidelines.  The calculations can be challenged, but any objections won't be resolved until the sentencing hearing.

Federal judges don't have to follow the sentencing guidelines and could impose a lower or higher sentence, but can't receive a sentence higher than the statutory penalty. This is a primary reason why a defendant charged with a federal crime needs to have representation from a defense attorney who regularity practices in federal court.

Experienced federal criminal lawyers know how to negotiate with federal prosecutors and understand how and when to bring appropriate objections on how the probation officer calculated the sentencing guidelines. They also know how to prepare an effective sentencing memorandum to persuade the federal judge to impose a sentence below what is listed in the guidelines.

Why Accept a Federal Plea Agreement?

There are situations where it's in the defendant's best interest to plead guilty and accept a federal plea agreement. For example, the prosecutor might allow a guilty plea to a lesser charge or dismiss another charge that carries mandatory minimum penalty.

Another example includes a situation where the defendant's guilty is not in doubt, or they don't have a valid defenses against the charges.  In other words, accepting a plea agreement is the best possible outcome.

The federal sentencing guidelines provide a reduced sentence for defendant's who plead guilty and accept responsibility for their conduct. This could potentially reduce a sentence by at least one year or more and it's the primary reason why defendants decide to enter a guilty plea in a federal court and accept the plea agreement.

Once the federal prosecutor and defense lawyer have reached an agreement on a plea bargain, the terms will be documented and presented to the federal judge. Defendant doesn't have to change their plea to guilty.

At this point, the judge will either accept or deny and plea agreement, but most plea agreements are accepted. If accepted, then the defendant will plead guilty and be sentenced. If rejected, the case will proceed as usual.

The primary goal for a federal plea bargain for the defendant is to get the best possible deal. It often involves aggressive negotiation with the federal prosecutor to persuade them that they are not likely to secure a conviction. If the Assistant U.S. Attorney believes a jury might not find the defendant guilty, they are likely to accept a better deal.

Criminal defendants need to consult with their lawyer to ensure they understand all the aspects of a plea agreement and whether accepting one is in their best interest.

Plea agreements are a familiar to most people. It's a way to potentially obtain a favorable outcome early in the federal criminal process.  As discussed above, there are a wide range of reasons a defendant might agree to take a plea bargain, but it should always be closely reviewed by a lawyer to make sure it's appropriate.

Eisner Gorin LLP is a top-rated criminal defense law firm that represents clients throughout the United States against any type of federal crime. We are located at 1875 Century Park E #705, Los Angeles, CA 90067. Contact us for a consultation at (310) 328-3776.