Getting involved in a criminal street gang and participating in gang activity within the United States can lead to severe consequences under federal laws. Gang members will not only face charges for the underlying crime, but will also face additional penalties due to their involvement with an organized gang. 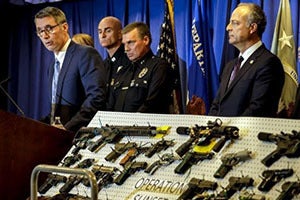 Criminal organizations are typically a small operation with some of their members selling illegal drugs. However, there are also large organizations that get involved in a wide range of criminal activity while posing as a legitimate business to conceal their illegal activity.

The United States Department of Justice's describes “criminal street gangs” as three or more people whose members identify themselves as adopting a group identify to create an environment of fear or intimidation. Their primary function is to engage in criminal activity by using violence or intimidation to further their criminal goals.

Active criminal organizations inside the United States include local street gangs, organized crime groups, motorcycle gangs, and prison gangs that often operate inside a prison such as the Mexican Mafia and the Aryan Brotherhood.

Federal charges are typically more serious as the penalties for a conviction are much harsher than a state-level crime. Also, federal law enforcement agencies and prosecutors have vast resources to investigate and prosecute alleged violations of federal laws.

Anyone facing a gang related charge needs to consult with a federal crime attorney who has experience handing these type case in a federal courtroom.

To give readers some useful information about the laws criminal street gangs, our federal criminal defense lawyers are providing a review below.

18 U.S.C. 521 provides a penalty enhancement of up to 10 years for gang members that commit crimes with the intent to further the activities of the gang, or to maintain or advance their position in the gang. It should be noted this sentencing enhancement is in addition to penalties for the original offense.

The circumstances where committing a crime could result in the sentencing enhancement under 18 U.S.C. 521 include the following:

As you can see, there are many ways someone could face federal criminal charges for being involved with a criminal street gang. It's also possible for someone to face charges even if they didn't directly commit the crime by charging them with conspiracy.

Under the RICO Act, you can be punished if you commit or conspire to commit two or more state or federal crimes in furtherance of the activities of a criminal street gang.

You are in violation of the RICO ACT when you are employed or have an association with a criminal enterprises and participate in activities affecting interstate commerce.

The statute also includes any acts of counterfeiting, obstruction of justice, sexual exploitation of children, interstate transportation of stolen vehicles, and any attempt to obstruct a federal criminal investigation.

Penalties for a RICO Act violation could result in a federal prison sentence of up to 20 years or even life, a fine up to $250,000, and forfeiture of profits from the illegal activity.

Criminal street gangs are typically involved in a large variety of illegal activity, but they are known for taking advantage of any perceived opportunities to make money. The most common federal crimes that are connected to criminal street gangs include the following:

As discussed above, federal prosecutors will frequently target criminal street gangs by using the RICO Act that allows them to pursue the leaders of the street gangs for crimes they directed others to commit.

There are many state and federal law enforcement agencies that investigate criminal street gang activity. The Federal Bureau of Investigation (FBI), Drug Enforcement Agency (DEA), and the Department of Justice (DOJ) are the primary sources for a investigating street gangs at the federal level.

Federal prosecutors take criminal street gang violations very serious and will aggressively pursue a conviction. There are many federal statutes at the prosecutor's disposal, but as stated above, their favorite is the Racketeer Influenced and Corrupt Organizations Act (RICO) described above. Under 18 U.S. Code § 1963, the penalty for racketeering could result in life in federal prison.

If you or a family member is under a criminal investigation for alleged involvement in a criminal street gang, you need to discuss the details with a federal criminal defense lawyer who knows how to deal with these type of cases in a federal courthouse.

Our experienced attorneys can assist you with making a decision on whether you should cooperate with federal agents in an effort to obtain reduced penalties.

If cooperation is not an option, we are skilled negotiators and could potentially obtain a plea agreement with the federal prosecutor for reduced charges or even a case dismissal. We are also fully prepared to take your case to trial in a federal courtroom.