United States customs laws are designed to control importation of goods and to impose taxes, which are comply called “duties.” The purpose of customs laws is to protect the economy, jobs, and the environment. The U.S. Customs and Border Patrol Protection agency (CBP) imposes duties on goods entering the country and are normally levied at the time of the importation. 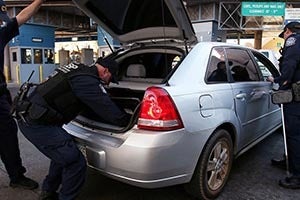 The United States has a complex set of import and export regulations which impose financial costs on those who engage in international trade. This creates an incentive to try to avoid import and export restrictions either by evading examination of shipments or by presenting false documents.

In both cases, this conduct constitutes smuggling of good under federal law and can give rise to a prosecution for criminal conduct in federal court.

Federal laws on customs related crime are described under customs are found in Chapter 27 of the U.S. Code and there are 15 different separate statutes.

Anyone who is found in violation of these federal laws could face both criminal and civil penalties. In addition to smuggling goods, there are other crime categories that are considered a customs violation, such as false declarations and exporting or importing violations.

To give readers a better understanding of the crime of smuggling goods, our federal criminal defense lawyers are reviewing 18 U.S.C. § 545, which is the primary statute used to prosecute these types of customs violations.

What Must the Federal Prosecutor Prove?

Under 18 U.S.C. § 545, a defendant must be proven guilty beyond a reasonable doubt of each of the following elements in order for the government to secure a conviction for smuggling goods:

The crucial elements of the crime that the federal prosecutor must prove to obtain a conviction warrants further discussion. Let's take a closer look below

The defendant must have knowingly and willfully, and with the intent to defraud the United States, smuggled or clandestinely introduced, or attempted to do so, any merchandise into the United States which should have been invoiced.

The defendant can also be found guilty where they present a false, fraudulent, or forged invoice for the purpose of evading import restrictions.

Another related, but distinct, theory of smuggling goods is where the defendant fraudulently or knowingly imports into the United States any merchandise which is contrary to law, or receives, conceals, buys, sells, or otherwise facilitates commerce in the unlawful goods knowing that they were smuggled into the United States.

Under this second theory, therefore, the defendant need not be the one who personally evaded import restrictions by smuggling the goods through customs.

If the defendant knew the goods were unlawfully smuggled and received them, bought them, or otherwise assisted in their introduction into commerce, these acts also constitute smuggling goods under 18 U.S.C. § 545.

As stated above, there are different relevant statutes for federal crimes related to customs that are contained in 18 U.S.C. Section 27. Some of the primary statutes include:

The actual sentence received by a particular defendant will depend on the application of the United States Sentencing Guidelines, which compare specific offense characteristics with the criminal history of the defendant.

The sentencing judge will also enjoy substantial discretion to impose an appropriate sentence and will be guided by the equitable factors contained in 18 U.S.C. § 3553(a).

These factors include the history and characteristics of the defendant, the need to avoid unwarranted sentencing disparities between similarly situated defendants around the country, and the need to make victim restitution.

The anti-smuggling provisions of Section 545 apply to the territorial United States, but specifically do not apply to the Virgin Islands, American Samoa, Guam, and several other islands.

Defenses to a charge of smuggling goods under 18 U.S.C. § 545 will tend to focus on insufficient evidence of the defendant's knowing, willful, and intentional efforts to evade customs requirements or present false invoices.

In the hustle and bustle of international trade, a huge volume of goods are imported and exported on a daily basis, all of which must be properly invoiced. It is entirely possible, and largely excusable, that errors will creep into some invoices over time.

The government must prove that these errors were intentionally included in the invoices in an attempt to smuggle goods rather than simply the product of an understandable oversight by the merchant involved in the trade.

Even after a shipment is seized for suspected smuggling, it is not necessarily guaranteed that a smuggling prosecution will follow in federal court. If you, or someone you know, is under investigation for smuggling goods in violation of Section 545, contact our experienced federal criminal defense attorneys today.

Through the process of prefiling intervention, experienced defense counsel can advocate before court for their client with federal law enforcement and the United States Attorney's Office to attempt to avoid the filing of formal charges in court.

Even if a filing is inevitable, a pre-indictment plea negotiation may lead to a more favorable outcome than if the client simply waited for charges to be filed and then began contact with the government after being charged.

Prefiling intervention focused on issues of proof and significant mitigating factors specific to the particular client is often a critical factor in achieving the best possible outcome.