Witness intimidation is a form of obstruction of justice and under 18 U.S. Code § 1512, it's a federal crime to interfere with witness testimony or cooperation in a criminal case.

In order to be charged with witness tampering, it has to be proven you attempted to alter or prevent witness testimony. It's important to note the action doesn't actually have to be completed. 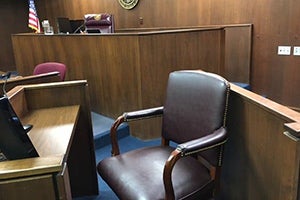 Anyone charged with 18 U.S. Code § 1512 witness intimidation can either be the defendant in a case or someone who attempts to interfere with testimony of a witness on behalf of the defendant or the prosecutor. The witness could be a victim or an informant.

Section 1512 of Title 18 of the United States Code provides extensive protection for witnesses, victims, and informants against attempts to obstruct justice by tampering with these persons.

With the exception of bribing the witness, victim, or informant as discussed in our separate article on 18 U.S. Code § 1510, Section 1512 covers almost every conceivable method of attempting to frustrate the administration of justice.

This includes interfering with individual's ability to report crimes to federal investigators, provide testimony in court or administrative proceedings, or even to participate in non-judicial proceedings such as Congressional or executive agency inquiries.

The federal government will seek to prosecute offenses of witness tampering under 18 U.S. Code § 1512 whether the tampering occurs within the United States' territory or abroad.

To give readers a more useful information about witness tampering, our federal criminal defense attorneys are providing a detailed review below.

When Congress most recently amended 18 U.S. Code § 1512, it did so to broaden the coverage of the federal criminal statute and sweep in as much obstructive conduct as possible.

This was accomplished in several ways including broadening the definition of informant, which now includes anyone with information relevant to a violation of a bail order, parole condition, or probation condition.

Informants protected by 18 U.S. Code § 1512 now include those who wish to transmit information to federal judges or pretrial services officers, not just federal law enforcement officers.

18 U.S. Code § 1512 prohibits the use of force, intimidation, threats, fear, or virtually all other unlawful means outside of bribery, which is separately prohibited, with the intention of dissuading or preventing a witness, victim, or informants from providing relevant information to one of the broad category of persons or institutions noted above.

This is truly a broad prohibition that addressed a large category of unlawful conduct. 18 U.S. Code § 1512 would equally be used to prosecute a defendant who threatens to kill a witness if the witness testifies in a court proceeding as it would a defendant who intimidates a colleague in the workplace to try to dissuade the colleague from providing documents to a Congressional committee which is investigating the defendant's business dealings.

Some examples of 18 U.S. Code § 1512 witness intimidation include the following:

Attempt is equally punishable under 18 U.S. Code § 1512. In many cases, the defendant's use of threats or force to obstruct justice will be unsuccessful.

The witness or informant may participate in the proceeding or investigation undeterred by the defendant's efforts. Nevertheless, the defendant is guilty under 18 U.S. Code § 1512 for having undertaken the attempt to tamper with the witness, regardless of the efficacy of their attempt. Ignoring a federal subpoena and contempt are defined under 18 U.S.C. 401 and 402.

The level of tampering required under 18 U.S. Code § 1512 is relatively minimal, though the severity of the offense and maximum possible punishment are proportionate to the seriousness of the obstructive efforts employed by the defendant.

In the most extreme case where the defendant actually kills the witness to obstruct justice, life imprisonment is possible.

In the case where a defendant uses physical force or attempts to kill the witness, victim, or informant to prevent their disclosures to law enforcement, a court, or other covered entity, the maximum punishment under federal law is 30 years in federal prison plus a fine.

As the severity of the offense decreases, so does the punishment. In cases of a threat of physical force intended to witness tamper, the maximum punishment is 20 years in federal prison.

Intimidation, threats, or corrupt persuasion also subjects the defendant to a maximum punishment of 20 years imprisonment.

The least serious form of witness tampering under 18 U.S. Code § 1512, the intentional harassment of a witness, victim, or informant, which results in that person being hindered, dissuaded, delayed, or prevented from testifying, is punishable by a maximum of 3 years in federal prison.

18 U.S. Code § 1512 contains a specifically enumerated affirmative defense which may be available in an appropriate case.

If the defendant can establish that their conduct consisted only of lawful means – meaning not threats, force, etc. – and was intended only to encourage the alleged victim to testify truthfully, the defendant is not guilty under Section 1512.

This defense is directed at those situations where the defendant is engaged in what might otherwise be thought of as harassing conduct, meaning phone calls, letters, strongly worded exhortations, etc. toward another individual concerning an investigation or judicial proceeding.

However, in some cases, the defendant is simply trying to persuade the witness or victim to truthfully participate in the investigative or court process.

While this conduct may certainly be annoying or even frightening to the witness or victim, depending on the circumstances, it is not criminal under 18 U.S.C. Section 1512.

Tampering with a witness is a serious federal criminal offense.  If you or a loved one, is under investigation for or has been charged with a violation of 18 U.S. Code § 1512, contact our team of experienced federal criminal defense attorneys for an initial consultation directed at preserving your rights and achieving the best possible outcome in your case.

Eisner Gorin LLP is a nationally recognized criminal defense law firm representing clients throughout the United States against any type of federal crime. We are located at 1875 Century Park E #705, Los Angeles, CA 90067. Contact our firm for an immediate response at 877-781-1570.