Murder is almost always prosecuted under state law in state court. However, under a limited set of circumstances, the federal government has jurisdiction over an alleged murder and the defendant will therefore be prosecuted in federal court.

Federal murder cases are often high-profile and federal prosecutors and law enforcement agencies under pressure to aggressively investigate and file charges against alleged suspects to bring them to justice.

Murders which will become potential federal crimes are those which occur in the special maritime and territorial jurisdiction of the United States. 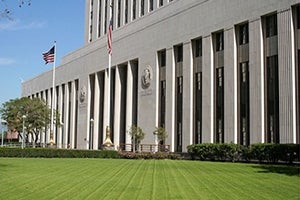 This could include murders which occur aboard ships in United States territorial waters, aboard airplanes under the jurisdiction of the FAA, or murders which occur in national parks or on military bases, which are places in which only the federal government has criminal prosecutorial authority.

The first step to understanding the violent crime of federal murder charges is to define murder itself. Not every death of another person can give rise to criminal charges at all, and some criminal killings do not qualify as murder.

To give readers a better understanding of murder charges the federal level, our federal criminal defense lawyers are providing a detailed review below.

Murder under 18 U.S.C. 1111 is the unlawful killing of another human being with malice aforethought. Each word in this definition has an important meaning which differentiates murder from many other acts which result in the death of another person.

The first term worth considering is unlawful. This excludes from the definition of murder the various forms of legally sanctioned killing. Death resulting from self-defense is not murder.

Likewise, a soldier who kills another combatant in wartime or an executioner who carries out the death penalty is not guilty of murder.

Malice aforethought is the traditional common law formulation to describe the mental state required for murder.

Murder cannot be charged in the case of an accident, such as a driver who is obeying traffic laws but nevertheless tragically causes a death through a traffic collision.

Likewise, the surgeon who is exercising diligence but fails to perform a surgery correctly resulting in his patient's death is not a murderer, though he may face other civil or even criminal penalties depending on the degree of his negligence, if any.

What Makes Murder a Federal Crime?

As stated, the vast majority of murder cases are handled by state prosecutors, but there are situations where they will be tried in a federal court, including the following:

Difference Between First and Second-Degree Murder

The differentiation between first and second-degree murder under federal law contained in 18 U.S.C. § 1111 will further illustrate the required mental state which the government must prove in order to secure a federal murder conviction.

First-degree murder includes any killing accomplished by poisoning, lying in wait, or any other kind of willful, deliberate, malicious, and premeditated killing.

The common factor in all of these terms is intent. Where the defendant lies in wait for the victim, or uses poison against the victim, we can fairly infer that he intended to kill the victim.

First-degree murder also includes the so-called “felony murder” rule. Felony murder, which is often labelled separately but legally also constitutes first-degree murder, is a killing which occurs during the perpetration of another dangerous felony by the defendant.

Again, this rule comes from common law. When a defendant chooses to engage in an inherently dangerous and illegal activity such as arson, escape from law enforcement custody, kidnapping, carjacking, treason, sabotage, aggravated sexual assault, rape, burglary, or robbery, the defendant assumes the legal risk that someone will be killed.

It is important to remember several things about felony murder which may be counter-intuitive. First, the victim of the murder need not be the intended victim of the underlying dangerous felony.

For example, the defendant can intend to rob person A, but in the course of fleeing the scene he kills person B inadvertently by running her over with his getaway car.

The defendant never intended to kill anyone and certainly did not intend to kill person B, or even rob her, but he is nevertheless guilty of first-degree murder of person B because her death occurred as a probable consequence of the robbery of person A.

All other killings which are perpetrated with malice aforethought are second-degree murder. These are often referred to as “implied malice” killings.

Though different courts have stated the standard differently through time, a second-degree murder is generally thought of as one in which the defendant kills someone while displaying reckless indifference to the value of human life, or acts with a “depraved heart.”

A hypothetical will help illustrate the difference between the degrees of murder. Suppose the defendant is driving on the freeway at substantially higher than the speed limit and is weaving back and forth through traffic.

On its own, this conduct is not a dangerous felony. It is likely a misdemeanor under most state laws, but even if a felony it is not in the traditional list of inherently dangerous felonies to which the felony murder rule applies.

Accordingly, when the defendant's driving results in a collision which kills another person, he is guilty of second-degree murder rather than first-degree murder.

His conduct was so reckless that he knew, or should have known, that death would likely result.  For second-degree murder, there is no requirement that the defendant intended to kill anyone or that he premeditated the killing.

Under Section 1111, a first-degree murder is punishable by the death penalty or by life in federal prison.

Second-degree murder is punishable by any term of imprisonment up to and including life, but not by the death penalty.

Current Department of Justice guidelines require a federal prosecutor to seek specific permission from the Attorney General before seeking the death penalty in a murder case.

Murder is one of the most serious federal crimes you can be charged and a conviction will carry life-altering consequences.

If you are facing federal murder charges, you need to retain an experienced federal criminal defense lawyer who battle-tested in court and knows how effectively negotiate with federal prosecutors.

Every case is unique and will require a thorough review of the details to determine the best strategy, but there are many potential defenses against murder charges.

For example, we might be able to argue you were acting in self-defense or defense of another person. Perhaps we can show you reasonably believed that you were in imminent danger of being harmed or suffering serious bodily injury and forced to take action.

Another potential defense includes showing the death was accidental. Perhaps you didn't intend to harm the other person and were not acting negligently when the killing occurred.

If you, or someone you know, is under investigation for, or has been charged with, the federal crime of murder, contact our team of experienced federal criminal defense attorneys for an initial consultation.  We can advise you or the best steps to take to maximize the chances of a positive outcome in your case.