Forfeiture and Seizure in a Federal Criminal Case

Federal law allows prosecutors and law enforcement agencies to seize property and money from individuals who were convicted of some types of federal crimes, such as drug offenses and money laundering.  This process is commonly known as a “forfeiture,” but a federal prosecutor has to prove a criminal defendant used to the property in question in order to commit the crime, earned it from illegal activity, or purchased it using money from illegal conduct.

Federal agencies such as the Drug Enforcement Agency (DEA), Federal Bureau of Investigation (FBI), and the Internal Revenue Service (IRS), may confiscate property when they believe the property are proceeds or the instrument of a crime. Federal forfeiture and seizure laws are designed to punish a defendant by reducing profits gained from illegal activity and to also provide substantial revenue for federal law enforcement agencies. 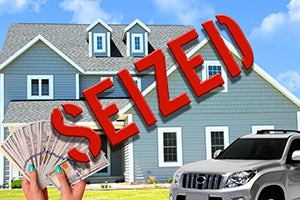 A common example includes a situation where the drug enforcement administration (DEA) will seize a speed boat that was used to transport illegal drug to the United States. Another example is the seizure of a home if they are able to prove it was purchased from proceeds from money laundering.

It should be noted the prosecutor's burden of proof in a civil forfeiture is a lot lower that a regular federal criminal proceeding. In some cases, this crucial burden of proof becomes the responsibility of the defendant, who will have to be able to show that have a valid claim to the property or money in question.

Since the prosecutor's burden of proof is so much lower, federal courts may decide the property is forfeited due to illegal conduct even when the prosecutor can't secure a criminal conviction of the defendant.

Such situations are hotly debated because it punishes a defendant without a trial. Additionally, due to high profits, critics of forfeiture and seizure laws argue they provide an incentive for federal agents to conduct searches that are not necessarily warranted.

To give readers a better understanding forfeiture and seizure laws, our federal criminal defense attorneys are providing an overview below.

Forfeitures and seizures are typically directly connected to federal criminal investigation into organized crime, such as drug trafficking, money laundering, and cases of Racketeer Influenced and Corrupt Organizations Act (RICO).

The most comprehensive statute for criminal forfeiture is 18 U.S.C. § 982, which allows the federal court to impose a forfeiture of property involved in any offense violating 18 U.S.C. § 1956 money laundering as part of the sentence.

There are also several additional criminal statutes where a violation will result in the forfeiture of proceeds that were gained from a defendant's criminal offense. These federal crimes include false statements, embezzlement, counterfeiting, mail fraud, wire fraud, drug smuggling, identity theft, import and export crimes, computer crimes, and other fraud crimes.

Some federal criminal laws, such as racketeering, have their own criminal forfeiture provisions, but these only apply after the defendant was convicted. Criminal forfeitures have the potential to seize more property, but they also require a much higher burden of proof than a civil forfeiture.

According to the Money Laundering Control Act, it's a crime to engage in financial transactions using money from certain unlawful activity when the intent is to conceal where the money came from, or to avoid reporting requirements.

The unlawful activity includes a variety of federal offenses, such as drug manufacturing and fraud related crimes. violent crimes and fraud. There are laws requiring transaction reporting for financial institutions when people make transactions over $10,000.

It's also unlawful to transport over $10,000 outside the United States when the intent to evade laws, or transporting money knowing it's the proceeds of illegal activity. Title 18 U.S.C. 2233 defines the crime of rescuing seized property.

Civil Forfeiture of Money or Property

If the government has a reason to believe the property or funds were prohibited, then federal agencies are allowed under several laws to seize the money or property and obtain a civil forfeiture. This includes a situation where the underlying crime was never charged or proven.

They can seize money and property they believe were obtained from criminal activity, even if they are currently in possession of some else who was not involved in the case. Since money and property can easily be moved quickly, it can often be seized by federal agents without ever appearing before a judge to show probable cause for a warrant.

Once property is seized, federal agents must provide written notice to the owner with 60 days. The property owner who wants to challenge the seizure can file a claim to identify their property. Once they file a claim, then the government has 90 days to start a civil forfeiture proceeding in a federal court, or they are required to release the property.

In a civil forfeiture hearing, the government must prove by a “preponderance of the evidence” the property is legally subjected to be forfeited, which means it was gained from criminal activity, or that the property was involved in an illegal transaction.

There are several potential defenses to prevent civil forfeiture action by the federal government. For example, if the government can't prove by a preponderance of the evidence the money or property was involved in illegal activity, or that owner of the property intentionally attempted to launder money or avoid reporting requirements, then their forfeiture claim should not be successful.

If an owner can prove they had no knowledge about the illegal activity, then they might be able to get their property back, even if it was involved in the unlawful activity in questions. In other words, an “innocent owner” defense who was not aware of the tainted nature or use of their property

Property owners can sometimes make a legitimate argument they didn't know of the property's role in illegal activity. For example, they may have purchased the property that later becomes part of a forfeiture claim by the government, but at the time it was bought, they had no knowledge that it was used in criminal activity.

For instance, let's say a criminal defendant claims the money that was seized from their bank account did not come from their drug sales, rather was legitimate from their job.

Getting Help from a Federal Forfeiture Lawyer

A major consequence of a civil forfeiture is that it allows the government confiscate someone's assets making it difficult for them to retain a lawyer to defend them against federal criminal charges.

In order to fight the forfeiture, a defendant has to prove the property is not subjected to a forfeiture. A forfeiture lawyer who has experience in federal court will know how to navigate you through this complicated process. There are options, such as the administrative review process where you can petition the federal agencies directly for the return of your property.

Federal forfeiture laws are complex and not every lawyer is qualified to handle these type cases. The forfeiture and seizure laws can take away almost everything you own, including your home, car, cash, and bank accounts. Perhaps you were charged with destroying property to avoid seizure. We can help you.

In a situation where criminal charges may be pursued by a federal prosecutor, a forfeiture challenge has to be dealt with carefully to prevent hurting a defense strategy.

This means you will need to retain an experienced forfeiture lawyer who knows how to property reply to a forfeiture notice, and how to get regain possession of your property.  If the government took your money or property, our forfeiture lawyers might be able to help you get it back. We need to first review all the details of your case and legal options.