The federal government takes counterfeiting currency seriously and the Secret Service seizes millions of dollars every year in counterfeit money.

The anti-counterfeiting laws passed by Congress state that whoever, with intent to defraud, falsely makes, forges, counterfeits, or alters any obligation or security of the United States can be imprisoned for up to 20 years. There are several federal statutes dealing with the creation, distribution, and use of counterfeit currency, including 18 U.S.C. § 471. 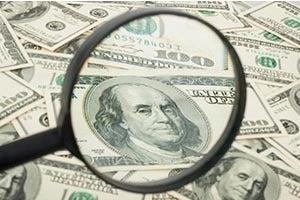 In order for money to be considered counterfeit, it has to be similar enough to the authentic bill that it would confuse an ordinary person. Additionally, the statute prohibits possession of tools that are used in counterfeiting and it's also illegal to buy, sell, exchange, transfer, receive or deliver counterfeit securities.

Counterfeiting typically involves some type of fraud or deceit and a conviction can result in severe penalties, including large fines and federal prison time under the United States Federal Sentencing Guidelines.

To give readers a better understanding of counterfeiting currency laws, our federal criminal defense attorneys are providing a detailed review below.

18 U.S.C. § 471 makes it a federal crime to falsely make, alter, or counterfeit any security or obligation that belongs to the United States of America. The obligations and securities covered under the federal statute include currency, treasury notes, reserve notes and bonds.

It should be noted there are several statutes that address the creating, distributing, or using counterfeit currency. These laws make it a crime to:

In order for a federal prosecutor to obtain a conviction for counterfeiting United States currency, they must be able to prove, beyond a reasonable doubt, you had possession with the specific intent to defraud.

If you are convicted of using, creating, or dealing in counterfeit currency, the penalties can be severe. The federal judge could sentence you to up to 20 years in a federal prison, along with a huge fine up to $250,000.

If you have been charged with the federal crime of counterfeit currency, our federal criminal defense lawyers can use a variety of strategies to fight the case.

A common defense is to make an argument there was a lack of intent. As stated, the federal prosecutor must be able to prove not just that you possessed counterfeiting materials or you were involved in transactions of counterfeit money.

They must also be able to prove you also had intent to defraud someone or pass off the counterfeit currency as real money. It they prove this crucial element of intent, then you have a good chance at avoiding a conviction.

Another potential defense is to make an argument that the quality of the counterfeit money was so poor, it doesn't meet the legal definition of being counterfeit. As stated above, in order for money to be considered counterfeit, it must be so similar to authentic money that it would confuse an ordinary person.

Crude copies of money could lack the primary identifying characteristics of real currency simply might not qualify as counterfeit in the context of a federal criminal prosecution. It should be noted, however, this type of defense has limits as you could still be prosecuted for attempting to produce counterfeit currency.

If you are under a criminal investigation for federal counterfeiting currency charges, you need to consult with a lawyer immediately. Early intervention into your case by our experienced federal criminal lawyers can have a huge impact on the outcome of the case.

We have extensive experience defending clients facing charges in the federal court system. If you are convicted of 18 U.S.C. § 471 or a related federal statute, you could be facing severe consequences. Our defense lawyers help Individuals who have been arrested or charged with a federal counterfeiting currency crime.